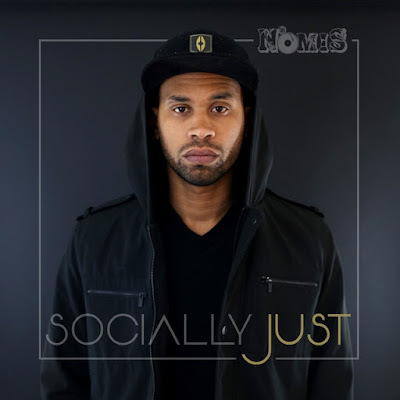 For a good number of years, he's been using his platform to shine the light on the issue of human trafficking. His new release, Socially Just, tackles that and several other social topics that we see in the daily news around us.

It's been 3 years
since the last official release from the Oceanside California native known as Nomis. In that time, Nomis has re-prioritized his position as an artist and the direction of his music. We've seen more and more glimpses of Nomis' passion for Social Justice as he's been very outspoken on current issues such as Human Trafficking and Law Enforcement. Being a Hip-Hop & Spoken Word artist who openly takes a stand for Social Justice is something he has now embraced with open arms. We've seen similar versions of this in the past with legends  such as KRS ONE and Public Enemy. We even see pieces of it from a few current artists such as Kendrick Lamar and Lupe Fiasco. But with the album Socially Just, Hip-Hop will finally get a "socially conscious" project where the themes expand further than just the issues of our neighborhoods and the inner city. While creating awareness, Socially Just will quickly become the soundtrack to anyone who holds a level of concern for the often disproportionate distribution of opportunity and privilege. Though the themes are heavy, it won't depress you but rather encourage you. The album is informative yet innovative. Driven by substance without sacrificing the craft of MCing. Socially Just is the sound of the masses gathering as one.