Pastor Rich Wilkerson Jr. interviewed on The Breakfast Club about friendship with Kanye West, his new reality show and much more 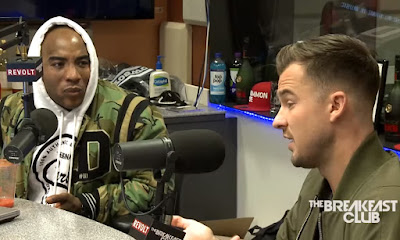 Power 105’s ‘The Breakfast Club’ continued their flurry of Christian guests with Pastor Rich Wilkerson Jr. who spent his interview breaking down the Trinity, explaining God’s grace and love, and of course his friendship with Kim and Kanye West.

Wilkerson did not hold much back in terms of the gospel message. He boldly proclaimed the reason Jesus came to Earth, which was to rid mankind of sin with the crucifixion.
The young pastor said “the message isn’t morality, it is changing hearts” when asked describe his take on the gospel. He preaches on God’s grace and mercy toward humanity citing that God is “patient with us” meaning there isn’t a timeline for the Lord to work. God will wait for His people to come to Him.

Co-host Charlamagne asked Wilkerson, “Do you think God forgives all?”
Wilkerson stuck to the Biblical stance of no sin being to great for God’s love. “We believe Jesus came…God poured out his wrath on Jesus so he wouldn’t do it on you.”
“If you put your faith in Jesus, you get to be positioned in Him.”
Wilkerson and his wife are the subjects of a new reality show called “Rich in Faith” which follows them starting a new church in the Miami area. It focuses mainly on the transition of leaving the ministry of his father’s church and also his marriage.
When questioned on his sermons, Wilkerson said he sometimes does them based on popular songs. One such example is the song “Side Piece.” He taught that if Jesus was your side piece, you would have a strong partner on your side.
He said the message sometimes catches the attention of the diverse area they are in. In fact, the church is located right next to a strip club. This is an opportunity to be a light in the dark.
“I think we should be in every space. It’s a message of faith, hope, and love and I just want to be part of the conversation. Whatever light avoids, darkness invades.”
He explained to the audience that Jesus was someone who was with everyone. He wasn’t afraid to be guilty by association. “He had grace for everybody…He was with people in conversation.”
“I love people…I want to do life with people…we are trying to walk out our faith being authentic, being who we are.”
Wilkerson was also pressed about his relationship with Kanye West and Kim Kardashian. He said Kanye came to the church through a mutual friend and the two of them “hit it off.” He even admitted “it was a huge honor” to marry the two of them.
The preacher also made sure to not keep the focus on the status of celebrities he has pastored. He maintained that he just loves people and the message is knowing Jesus Christ. Charlamagne asked about the name of the celebrity couples newest child, Saint West.
“I think it’s a cool name…if you are a believer in Jesus, we are all saints.”