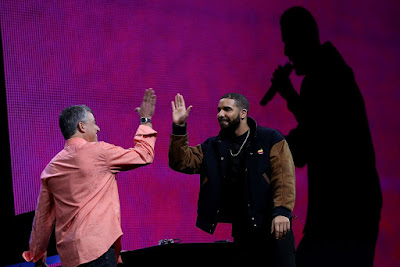 Apple's foray into original video programming started before Taylor Swift's 1989 World Tour Live — with Drake's "Hotline Bling" music video. According to a report from Recode today, Apple didn't simply pay Drake to release the video through its streaming music service. It actually financed the James Turrell-inspired dance session on drakes Hotline Bling, which was released as an exclusive on Apple Music in October of last year before it made its way to YouTube and other platforms about a week later. "Hotline Bling" quickly blew up on the internet, becoming a colossal meme factory, finding its way into the 2016 presidential race, and spawning one of the more culturally relevant Super Bowl 50 ads.

The news comes on the heels of a report that Apple is investing more in original video production. Last Friday, The Hollywood Reporter said Apple is producing six 30-minute episodes of Vital Signs, a new TV show about Beats co-founder and Apple employee Dr. Dre. The company will reportedly distribute the show through Apple Music just as it has Swift's 1989 concert movie and Drake's "Hotline Bling" video.
A Drake music video, a Taylor Swift concert movie, and a Dr. Dre TV show
Recode's Peter Kafka says the move is all about driving adoption of Apple's streaming service: "Apple has already been financing video content it uses to market Apple Music — 'to extend Apple Music,' in the words of an insider. And it’s doing that with the Dre show. Full stop." Drake originally signed a deal with Apple last year to distribute his upcoming album, now called Views from the 6 and due out April 16th, through Apple Music. The rapper showed up at the company's WWDC conference in June to announce the news, and the financing of music videos like "Hotline Bling" is part of the deal.
Apple executives Craig Federighi and Eddy Cue appeared on John Gruber's podcast, The Talk Show, last week, revealing that Apple Music now has 11 million subscribers. The growth is notable considering the service doesn't have a free tier like competitor Spotify, which has about 20 million paid subscribers and 55 million free users. Paid exclusives could become one of the more significant ways people either sign up for or switch to competing streaming music services down the line.
The exclusivity strategy goes both ways, though. Kanye West told fans via Twitter today that his new album, The Life of Pablo, would "never never never be on Apple" and won't be for sale. West released the album this past weekend on the Jay-Z-owned streaming service Tidal, and the app quickly shot up to the No. 1 spot on Apple's App Store. Now West says TLOP is staying there forever.
ENTERTAINMENT NEWS TECHNOLOGY