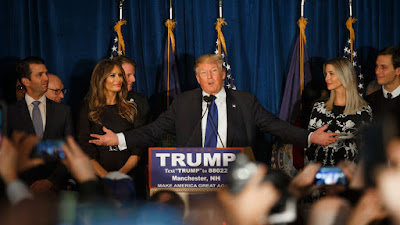 MANCHESTER, N.H. — Donald J. Trump and Senator Bernie Sanders of Vermont harnessed working-class fury on Tuesday to surge to commanding victories in a New Hampshire primary that drew a huge turnout across the state.
The success by two outsider candidates dealt a remarkable rebuke to the political establishment, and all but guaranteed protracted, bruising races for each party’s presidential nomination.
Mr. Trump, the wealthy businessman whose blunt language and outsider image have electrified many Republicans and horrified others, benefited from an unusually large field of candidates that split the vote among traditional politicians like Gov. John Kasich of Ohio, who finished second, and former Gov. Jeb Bush of Florida.


But Mr. Trump also tapped into a deep well of anxiety among Republicans and independents in New Hampshire, according to exit polling data, and he ran strongest among voters who were worried about illegal immigrants, incipient economic turmoil and the threat of a terrorist attack in the United States.

With more than 80 percent of precincts reporting, Mr. Trump had received 35 percent of the vote, and Mr. Sanders approached 60 percent.
The win for Mr. Sanders amounted to a powerful and painful rejection of Hillary Clinton, who has a deep history with New Hampshire voters and offered policy ideas that seemed to reflect the flinty, moderate politics of the state. But Mr. Sanders, who has proposed an emphatically liberal agenda to raise taxes and impose regulations on Wall Street, drew support from a wide cross-section of voters, even edging her out among women, boosted by his appeal among the young.
At his victory party, Mr. Sanders, flashing a wide, toothy grin, pointed to the large voter turnout as evidence that only he could energize the Democratic electorate to defeat the Republicans in November.
“Together we have sent a message that will echo from Wall Street to Washington, from Maine to California,” Mr. Sanders said. “And that is that the government of our great country belongs to all of the people, and not just a handful of wealthy campaign contributors and their ‘super PACs.’ ”


While Mr. Sanders led New Hampshire polls for the last month, and Mr. Trump was ahead here since July, the wave of support for both men was nonetheless stunning to leaders of both parties who believed that in the end, voters would embrace more experienced candidates like Mrs. Clinton or one of the Republican governors in the race. Yet the two men won significant support from voters who felt betrayed by their parties and were dissatisfied or angry with the federal government.
Beyond Mr. Trump, four Republicans were clustered together, each receiving less than 20 percent of the vote. Mr. Kasich’s surprise second-place finish was driven by voters who described themselves as moderates and independents and were charmed by his pragmatism and his upbeat campaign. Effectively skipping Iowa, Mr. Kasich spent 62 days in New Hampshire, holding 106 town-hall-style events.

“We never went negative because we have more good to sell than to spend our time being critical of somebody else,” an ebullient Mr. Kasich told supporters, vowing “to reshine America, to restore the spirit of America and to leave no one behind.”
But as striking as Mr. Kasich’s surge may have been, the fall of Senator Marco Rubio of Florida may have been more significant. Mr. Rubio initially appeared to be capitalizing on his strong finish in Iowa, rising in the polls here, but a disastrous debate performance on Saturday halted his momentum. Mr. Rubio; Senator Ted Cruz of Texas, who won the leadoff Iowa caucuses; and Mr. Bush, whose campaign was all but left for dead after a series of poor debate performances and staff cutbacks, were bunched together.
Gov. Chris Christie of New Jersey finished a disappointing sixth after staking his campaign here. With little money left and a slim chance of being eligible for a Republican debate on Saturday, the governor said he was going back to New Jersey on Wednesday “to take a deep breath.” Supporters of Mr. Bush, who formed an alliance with Mr. Christie here as both sought to diminish Mr. Rubio, are lobbying him to endorse the former Florida governor.

Mr. Trump’s win is the biggest victory in a New Hampshire Republican primary since at least 2000. He won pluralities of both Republican and independent voters, and showed strength across demographic groups. At an exuberant victory party at a banquet hall in Manchester, people waved foam fingers reading “You’re hired!” or “Make America great again!” Mr. Trump’s remarks ranged from emotional expressions of thanks to his late parents to more belligerent assertions that echoed his stump speech.
“I am going to be the greatest jobs president that God ever created,” vowed Mr. Trump, adding that he would “knock the hell out of ISIS,” or the Islamic State.
Mr. Trump’s performance here, which followed Mr. Cruz’s victory in Iowa, has left the party establishment with two leading candidates who Republican leaders believe cannot win a November general election.
And with Mr. Rubio unable to establish himself as the clear alternative, the Republican race moves to South Carolina with little more clarity than before New Hampshire voted.
For the Democrats, Mr. Sanders’s popularity with liberals, young people, and some women and working-class white men has underscored potential vulnerabilities for Mrs. Clinton in the nominating contests ahead. She is now under enormous pressure to prove that her message can inspire and rally voters.
In a punchy concession speech, Mrs. Clinton tried to look beyond New Hampshire and pledged to fight for the needs of black, Hispanic, gay and female voters — members of the coalition that she believes will ultimately win her the nomination.
“Now we take this campaign to the entire country,” Mrs. Clinton said. “We’re going to fight for every vote in every state,” she added, continuing, “I know I have some work to do, particularly with young people.”
Clinton advisers gritted their teeth Tuesday night as they dissected exit polls and other data to try to fathom the depth of Mrs. Clinton’s political vulnerabilities. One troubling sign: Mr. Sanders was the choice, nearly unanimously, among voters who said it was most important to have a candidate who is “honest and trustworthy.”Several advisers to Mrs. Clinton said they were especially concerned about her shakier-than-expected support among women — the group that provided her margin for victory in the 2008 New Hampshire primary. The Clinton strategy depends on her beating Mr. Sanders among women and attracting large numbers of minority voters, like Hispanics in Nevada and African-Americans in South Carolina. Those states hold the next Democratic contests, later this month.
Both the Sanders and Clinton campaigns have built robust political operations in those next states, but Sanders advisers say momentum is on their side after the New Hampshire victory and a near-tie in the Iowa caucuses. Mr. Sanders is also hoping that his proposals for a $15 minimum wage and a breakup of big banks will find support in vote-rich Las Vegas and Reno, where many people earn low wages and lost homes to banks after the 2008 financial crisis.

A win for Mr. Sanders in the Feb. 20 Nevada caucuses would raise additional doubts about Mrs. Clinton. Perhaps wary about her chances there, her campaign manager sent a memo to supporters Tuesday night urging them to focus on the contests in March, when some 56 percent of delegates will be awarded.
But first Mrs. Clinton and her husband must shake off the New Hampshire loss, one of the most stinging of their long political careers.
The couple have been unusually attached to this state for decades: Bill Clinton stabilized his scandal-plagued presidential bid in 1992 with a second-place finish in the primary, and Mrs. Clinton made her own comeback in 2008 by winning here with 39 percent of the vote after losing the Iowa caucuses to Barack Obama.
This time around, the Clintons tried to diminish the state’s importance by arguing that Mr. Sanders had an advantage because he was from a neighboring state. But they campaigned vigorously all the same, and Mr. Clinton himself unleashed a lengthy, pointed attack on Mr. Sanders at an appearance on Sunday evening.
The defeat also powerfully captured the way the Democratic electorate has changed since the Clintons held power in the 1980s in Arkansas; in the 1990s in the White House; and through early 2009, when Mrs. Clinton gave up her Senate seat in New York to become secretary of state. The party’s restive left wing is exerting much more influence, partly because of anger at the financial industry and establishment politics after the Great Recession. Mrs. Clinton, in turn, has always come across as a pragmatist more than a dreamer, and she rarely intones a vision of America that is broadly inspiring.
“That lack of idealism is what allowed Obama to beat her, and it’s giving Bernie room to grow,” said Dan Payne, a Democratic strategist in Boston who supports Mrs. Clinton.
Advertisement
Continue reading the main story
Advertisement
Continue reading the main story
The unaffiliated New Hampshire voters who participated in both party primaries, and who supported Mr. Trump and Mr. Sanders in sizable numbers, appear to have found those candidates’ anti-establishment messages to be an asset.
Mr. Trump disregarded the time-honored New Hampshire traditions of lavishing personal attention on voters. Instead, he flew in and out of the state on his private jet when the weather cooperated, held raucous rallies, and won support by faulting immigrants who entered the country illegally for crime and job losses, proposing a temporary ban on Muslims to prevent terrorism. He may have held fewer events here than any other Republican except Ben Carson, but his voters cared little.
His approach here, and his success, have left New Hampshire’s Republican leaders, who jealously guard their first-in-the-nation status, both perplexed and appalled.
“By name, I only know five people supporting Donald Trump,” John H. Sununu, a former governor, said Tuesday. “So I say I cannot understand this electorate.”