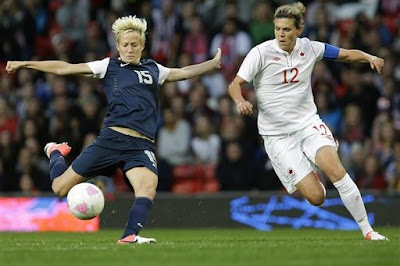 Since women’s soccer was added for the 1996 Olympics, the United States has won four of five gold medals, including the last three.
The qualifying tournament for North and Central America and Caribbean sends the semifinal winners to Brazil this summer. Canada plays Costa Rica in the other match, with winners meeting in Sunday’s championship.
The United States went 3-0 with a 16-0 goal difference in the group stage of the eight-team tournament. The Americans capped the first round with a 10-0 rout of Puerto Rico led by a team record-tying five goals from Crystal Dunn, the last player cut from the roster that won last summer’s World Cup in Canada.
A look at the teams in the semifinals:

UNITED STATES: The top-ranked Americans have never lost a CONCACAF Olympic qualifier, going 16-0-1, and they’ve outscored opponents 91-4.
The roster has a younger look at last year’s World Cup. Several players, including Abby Wambach, have retired. Amy Rodriguez and Sydney Leroux are expecting and won’t be available for the Olympics. Megan Rapinoe is recovering from knee surgery. While still led by veterans including Carli Lloyd and Alex Morgan, the average age of the team dropped to 25.7 years from the World Cup squad’s 29.5.
Dunn is 23 and looking to make her mark.
“We’re very excited,” she said of the prospect of going to Brazil. “Of course, the tournament’s not over. We have to stay focused.”
TRINIDAD AND TOBAGO: The Soca Warriors have come a long way since they arrived in the United States for World Cup qualifying in 2014 with barely enough money for food. T&T is a team that appears to be on the upswing, with players including Kennya Cordner, who formerly played for the NWSL’s Seattle Reign. It is the first time T&T has made the semifinals in qualifying.
“We have to go out and play with all heart,” said Cordner, who has three goals.
Trinidad, which fell to the United States back in 2014, concluded the group stage on Tuesday with a 5-1 victory over Guyana.
COSTA RICA: Costa Rica finished group play with a 2-1 victory over Mexico, which will miss its third straight Olympics.
Las Ticas are led by Raquel Rodriguez Cedeno, who has five goals in the tournament so far. A Hermann Trophy winner, she was co-captain of the Penn State team that won last year’s NCAA title. Rodriguez, 22, was the second overall pick in the recent NWSL draft by Sky Blue.
Costa Rica lost to the United States in the tournament opener.
CANADA
Canada swept its group stage matches by outscoring its opponents 21-0, including a 10-0 rout of Guatemala. Ranked No. 11 in the world, Canada was the surprise bronze medalist at the 2012 London Games, defeating France 1-0. Canada also hosted the World Cup last summer but lost to England 2-1 in the quarterfinals.
Forward Christine Sinclair scored her 159th goal, moving one ahead of American Mia Hamm for second on the career international scoring list behind Wambach (184). Sinclair, who played for the University of Portland and is currently on the roster for the NWSL’s Portland Thorns, sat out Canada’s match on Tuesday.
SPORTS TRENDING