Daniel Bryan Opens Up About His WWE Retirement on Monday Night Raw: ''I Don't Want to Be Doing This'' 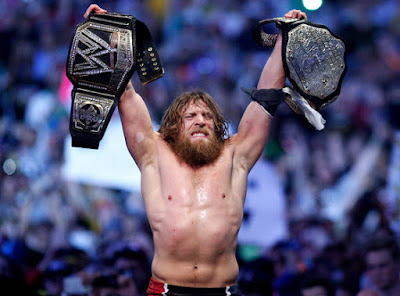 Bryan is opening up about his decision to retire from the WWE.
On Monday morning, Brie Bella's husband shocked the world when he announced his retirement on Twitter.
"Due to medical reasons, effective immediately, I am announcing my retirement. Tonight on Raw, I'll have a chance to elaborate. #gratitude," he tweeted.
Then on Monday night, Daniel appeared on Monday Night Raw where he did have the chance to elaborate.
After receiving a standing ovation from the crowd an emotional (and newly shaven) Daniel spoke to his fans.
"Now it is time for me to address the giant elephant in the room," Daniel began. "I know, I know, I didn't want to shave my beard either."
After breaking his silence with a joke, Daniel went on to say that he actually cut his hair for the Wigs for Kids organization.
Then it was time for Daniel to talk about his retirement.

"Now to some less fun stuff," Daniel said. "Trust me I don't want to be doing this anymore than you guys want me to be doing this. But the truth is I've been wrestling since I was 18 years old and within the first five months of my wrestling career I'd already had three concussions, and for years after that I would get a concussion here and there or here or there. And then it gets to a point when you've been wrestling for 16 years that that adds up to a lot of concussions, and it gets to a point where they tell you that you can't wrestle anymore."
That wasn't something that Daniel was willing to just accept.
He explained, "For a long time I fought that because I'd gotten EEGs and brain MRIs and neuropsychological evaluations and all of them said this, that I was fine and that I could come back and I could wrestle and I trained like I would come back and I would wrestle and I was ready at a moments notice if WWE needed me I wanted to come back and wrestle. Because I have loved this in a way that I have never loved anything else."