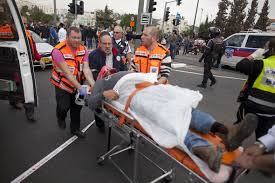 “Thou, who hast made me to see many and sore troubles, wilt quicken me again, and bring me up again from the depths of the earth.” (Psalms 71:20)
ZAKA, Israel’s primary rescue and recovery volunteer organization, is dealing with a marked increase in unnatural deaths since the latest wave of terror began October 2015. Unnatural deaths include suicides, murders, decomposing bodies, drug overdoses, and terror.
Typically, ZAKA volunteers deal with an average of 30 incidents of unnatural deaths every week. However, because of the current wave of terror, ZAKA is being swamped with a dramatic increase of incidences, stretching its resources.
“ZAKA handles both the victims of terror and the terrorists themselves,” noted Yossi Fraenkel, ZAKA International Rescue Unit Operations Officer and Deputy Commander of ZAKA Jerusalem, to Breaking Israel News. “ZAKA volunteers have already dealt with 35 victims of terrorism and over 148 terrorist bodies since this terror wave began. This is in addition to the “routine” work that we do.”

There are presently only two ZAKA ambulances which cover the entire Jerusalem and Gush Etzion regions. Not only is this insufficient to take care of the approximately 880,000 residents of these areas, but these ambulances have also been on the road for over 12 years, making the cost of repair, maintenance and insurance no longer viable.


Additionally, there is a general shortage of ZAKA ambulances for the rest of the Holy Land. “ZAKA ambulances are not like other emergency care ambulances. They are like mini-warehouses for ZAKA volunteers,” explained Fraenkel to Breaking Israel News. “These are specially equipped with not only search and rescue and lifesaving equipment but also protective vests for the volunteers and unique materials needed to clean up body parts and blood and return the scene of a tragedy back to functioning in the quickest possible way.”
To that end, ZAKA has set up a “Causematch” campaign to raise the funds for the urgently needed ambulances. These ZAKA ambulances will service Jerusalem, Gush Etzion, Haifa, Ashkelon and Rehovot. “Especially in light of the nearly daily terror attacks we are facing, these specially outfitted ambulances are crucially needed,” continued Fraenkel.
With the help of a matching donor, ZAKA hopes to purchase five desperately needed ambulances by quickly raising the necessary $550,000. These ZAKA ambulances will ensure that people in life-threatening situations will get the help that they need as professionally and efficiently as humanly possible and the dead will receive their due care as well.
One of ZAKA’s mottos is, “First to arrive, last to leave”. ZAKA is recognized across Israel, and now internationally, as the organization made up of volunteers who have chosen to fulfill God’s mission of honoring people in often grim circumstances, whether they are dead or alive.
“The nation of Israel is suffering under the burden of terror,” reflected Fraenkel to Breaking Israel News. “But we are also standing strong in the face of this horrible situation. We are praying that our supporters will take a strong stand with us and help get these ZAKA ambulances. When people see ZAKA on the scene, they gain hope that everything possible is being done to save those who can be saved and honor those who cannot.”