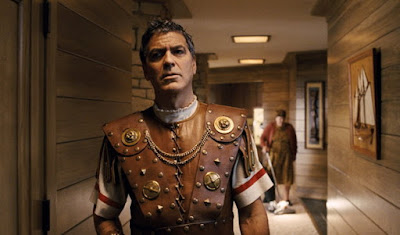 You wanna think the first problem with Ethan and Joel Coen's new "comedy" "Hail, Caesar!" arrived with the movie-trailer TV ad, which flooded the airwaves the week before the film opened.
Unsuspecting viewers get the impression that "Hail Caesar!" is a conventional, wacky, slapstick send-up of 1950s Hollywood. George Clooney plays a matinee idol who is kidnapped from the set of a "Ben Hur"–like, big-budget picture.
"Hail, Caesar!" is also packed with big-names ranging from Hollywood stars. Clooney, Josh Brolin, Scarlett Johansson, Tilda Swinton, Jonah Hill, Ralph Fiennes and Channing Tatum are all on board here. It's got to be great, right? Not so much.

It's a perfect example of false advertising. The Coens don't do "wacky," and they don't do "slapstick." "Conventional" is not in their vocabulary. (Although their version of "No Country For Old Men" is a straight and faithful adaptation of an Cormac McCarthy crime novel. And I also consider it their best movie.)
They make comedies that are slick, hip and detached. They don't spoof their movie subjects so much as they sneer at them. (For a diametrically opposite take, see Joanna Connors' review here.)
Brolin plays a Hollywood fixer whose job it is to cover up or keep quiet the bad behavior of the studio's stars. But just as in "The Big Lebowski," which was a send-up of "The Maltese Falcon," the plot of "Hail, Caesar!" is not the point. The Coen brothers are illustrators of the absurd.
They seem to ask the same question over and over again: Isn't life weird? Isn't life ridiculous and pointless?
While I was watching the movie, the theater was like crickets. There wasn't a single laugh for the entire 100 minutes, save for one hipster girl in the back row who was trying so hard to find the humor with her forced laughter that I was afraid she was going to pull a muscle.
Hipster appeal is one of the things the Coens have going for them. Ever since "The Big Lebowski" became a cult hit, with fans memorizing all the lines and having Big Lebowski conventions (everybody shows up in bathrobes and drinks White Russians), the Coens have become hipster gods.
The hipster label serves as a kind of shield against criticism. If you don't like a Coen brothers movie, it just means you are too square to "get it." It means you're all hung up on the idea that a movie needs to have a story or plausible characters.
If everyone in your movie is a jokey cliche, then you're under no responsibility to have the story make sense or ask the audience to care about it.
I have to admit that the first time I saw "The Big Lebowski," a movie with which "Hail, Caesar!" has a lot in common, I didn't get it at all. It made me feel angry and ripped off. However, years later, seeing it again -- and that second time, already knowing it made zero sense -- I found it enormously funny.
I simply focused on the parade of bizarro characters and their odd verbal interactions with each other. I guess I finally "got it."
Nobody at the Capitol Theatre's 1 p.m. screening I attended was digging "Hail, Caesar!" much, except for hipster girl. When the credits ran, you could hear a woman in the back ask her husband what he thought of the movie.
"It was a bunch of baloney," he said loudly.
He got the only laugh of the afternoon.
MOVIE SECULAR MOVIE TRENDING