Iranian Women Protest Over Non Acess to Stadium based on Gender 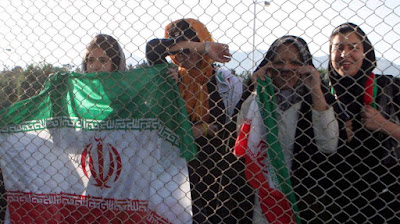 The first men’s beach volleyball tournament in Iran kicked off on February 15th, but only men were allowed into the Azadi Sport Complex where the matches were being played till the 19th of this month. According to a report by the Human Rights Watch, women were denied access to the stadium at the gates and were also intimidated by the local officials. Therefore women who had travelled a long distance to the stadium had to be content with watching the proceeding matches from a nearby coffee shop.

Denying women  access to the facility clearly pushes away the promises of the Iranian government to the International Volleyball Federation (FIBV) that women will be allowed entry at the gates. News sources reveal that one of the key conditions given to Iran before it was awarded the event was that it will be open to men even though there was a long standing ban on women being allowed to watch volleyball matches. On February 7th the FIBV announced that “the event will be open to fans from all age groups and genders” which includes families and women.
The Director of Global Initiatives at HRW, Minky Worden, has faulted the FIVB’s strategy and highlighted the unfair treatment of women in the state. Although the FIBV claimed that the incident was a result of a “slight misunderstanding”, Worden believes that it is not a matter to be trivialized.
In her statement, Worden said “Brave Iranian women, who took the FIVB at its word, were turned away at the turnstiles this week, that is a black eye for the sport of volleyball and a setback for women’s rights in Iran. This sorry episode highlights the shortcomings of the FIVB’s strategy with the Iranian government and contradicts their claims that all Iranian fans are welcome. This episode is far more serious than a ‘slight misunderstanding’, since it spotlights the broader risk the 2012 ban imposed on Iranian women who seek to attend volleyball matches. It is not fair to ask women to come to the matches without protection and planning for the likelihood that women would have trouble at the gates as in past years.”
In response to the criticism of the HRW, the FIBV has reportedly commenced an investigation to ascertain the cause of the dismissal of the women.
Iran’s long standing history of banning women from watching sports.
Women’s football existed in 1970, although there were dressing and behavioral codes. However, since the 1979 revolution, rules that border on discrimination were enforced on women, which includes not allowing them entry into stadiums.
Women are being banned from watching sports on the premise that it may promote undue interaction between both genders. Volley ball was off-limits from women after a chant match between men and women fans watching a volleyball match in 2013. However, the ban came to global attention with the arrest of some young women, who were protesting for access into the stadium, while Iran was playing against Italy in 2014. One of the protesters, Ghoncheh Ghavami was jailed for five months and the publicity her arrest garnered made the FIBV call on Iran to ensure entry to all the games or lose the right to host international tournaments.
However, not all Iranians were pleased with this move. The president of the Iranian parliament’s cultural affairs committee, Ahmad Salek Kashani, said “Women who are allowed to enter the stadiums, what are they going to watch? Is it anything other than men’s bodies that have been left bare because of sports clothes?”
This is how FIVB can change the conversation
Minky Worden believes that the FIBV has a unique opportunity to change the status quo for the women of Iran since its constitution pledges non-discrimination. “The FIVB has awarded Iran hosting rights for the Kish Open and for the June 2016 World League matches in Tehran, so the ball is in their court to ensure Iran plays by international rules,” Worden said. “Women being sidelined like this is all the more reason for the FIVB to press Iranian authorities lift this discriminatory ban.” She says.