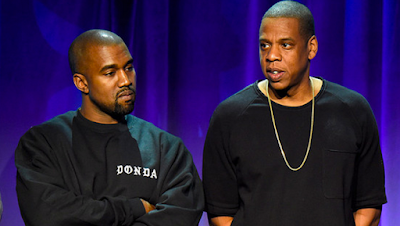 
West's latest album was released online on Saturday night exclusively on the music streaming service Tidal, which is owned by West's friend and fellow rapper Jay Z.
West added on Twitter Monday, "please to all my friend fans and music lovers. Sign up to Tidal now."

This is the second time in recent days where the music artist pushed for the streaming site.
Over the weekend, West tweeted that he "decided not to sell my album for another week" and to please subscribe to Tidal.
This plea seemingly worked with the music service's app shooting to the top of Apple's app store charts.

Tidal is now the number one app in the world!!!


West also tweeted on Monday night about The New York Times, Rolling Stone and Pitchfork and "any other white publication" to "please do not comment on black music anymore."
"I love love love white people but you don't understand what it means to be the great grandson of ex slaves and make it this far," West added.

To Pitchfork, Rolling Stone, New York Times, and any other white publication. Please do not comment on black music anymore.


Apple Music did not immediately respond to a request for comment on this story.
ENTERTAINMENT NEWS TRENDING