Kanye West- The Only Throne Is God's 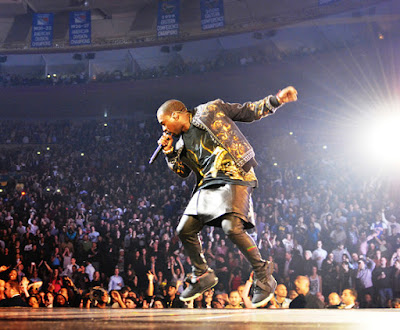 Following rapper Kanye West‘s ranting ever since he became very active on Social Media site Twitter, we have seen feuds including Wiz Khalifa, Amber Rose, Apple Music and most recently, Taylor Swift.
We just wouldn’t want to go into details in full but just in another Twitter rant yesterday by Kanye where  West indirectly admitted his wrong and also referenced God Almighty.
The rapper may have begun the journey to self as he took back a comment he made earlier on taking the throne of rap music and acknowledging God as the one with the worthy throne.
See Tweet:


If one can admit his wrong and swallow his pride, he certainly headed for a good place and for a rapper who has put out rather blasphemous albums and lyrics, this may be the first step in the right direction.
It can be recalled that Gospel singer Kirk Franklin‘s association with the rapper has been strengthened in recent times, with the Gospel singer featuring on West’s album. One can even speculate that the association is beginning to rub off on Kanye West. Amidst the whole criticism by fans of Kirk Franklin, he ended his caption of a moment with Kanye West with the words “Pray we win”…  and we are praying!
ENTERTAINMENT NEWS GOSPEL NEWS TRENDING