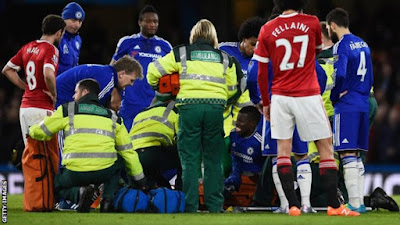 Chelsea defender Kurt Zouma faces six months out because he needs surgery on the knee injury he suffered on Sunday.
The 21-year-old landed awkwardly after contesting a high ball and was taken off on a stretcher in the 1-1 Premier League draw with Manchester United.
"Scan today has shown I injured my anterior cruciate ligament. I will have surgery this week and will come back stronger," Zouma tweeted.


Scan today has shown I injured my ACL. I will have surgery this week & will come back stronger. Thank you everyone for all the messages 🙏🏻🙏🏻
— Kurt Zouma (@KurtZouma) February 8, 2016

Chelsea said he would be out for "approximately six months".
The France centre-back has made 32 appearances for the Blues this term.
The most recent of his two France caps was in an international friendly with Denmark in October.
France host this year's European Championship, which begins in June.
Zouma and John Terry have become preferred starters in central defence as Chelsea have gone nine matches without defeat under interim manager Guus Hiddink.
SPORTS