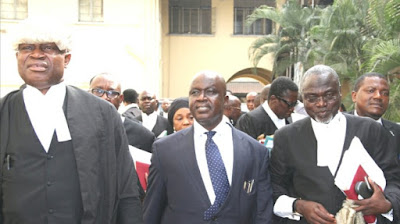 A Nigerian judge has immediately criticized a lawyer facing criminal charges after he turned up to court earlier today in Lagos with a defence team of more than 90 people.
Justice Aishat Opesanwo described the approach as tantamount to "harassment and intimidation", a statement by Nigeria's anti-corruption agency says.
Prominent lawyer Rickey Tarfa is charged with the obstruction of justice and attempting to pervert the course of justice.
He denies both sets of charges.
Mr Tarfa is accused of blocking the arrest of two suspects wanted in a corruption case by keeping them in his car for nearly six hours on 5 February when they were due to be picked up by the authorities, according to a statement from the Economic and Financial Crimes Commission (EFCC), which brought the case.
In the second charge, he is accused of perverting the course of justice by communicating through his personal mobile phone with a judge overseeing a trial between the EFCC and two private companies which he was representing.
Mr Tarfa was granted bail at the hearing and the case has been adjourned until March.
GLOBE TRENDING