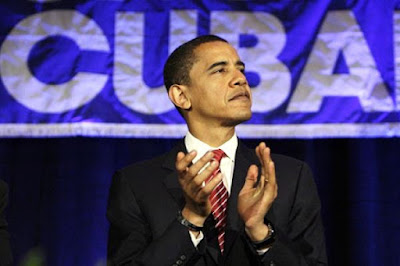 The President of the United state of America  will meet dissidents and President Raul Castro in Cuba next month, the White House announced on Thursday, announcing a historic trip that will be another major step towards ending decades of animosity between former Cold War foes.
In the first visit by a U.S. president to the Caribbean nation since 1928, Obama will meet entrepreneurs and people from different walks of life during the trip on March 21 and 22, but he is unlikely to see Fidel Castro, the former president and revolutionary leader, U.S. officials said.
The White House hopes Obama's trip will help accelerate change on the Communist-run island and cement progress made under his watch, but Republicans at home complained that it would give legitimacy to Cuba's oppressive government.
"Next month, I'll travel to Cuba to advance our progress and efforts that can improve the lives of the Cuban people," Obama wrote on Twitter.

ADVERTISING
After decades of hostility following Cuba's 1959 revolution, the two countries agreed in 2014 to move to reopen ties, but the U.S. embargo on Cuba remains and Washington frequently criticizes Havana's human rights record.
The opening to Cuba was a diplomatic feat that is likely to form part of Obama's foreign policy legacy along with the nuclear deal he struck with another long-time U.S. foe, Iran.
Officials decided that travelling to Cuba now rather than at the end of Obama's term would give them more leverage to make progress on expanding Internet access and opening up business opportunities for Cubans and Americans.
Obama regularly meets with civil society groups when he travels abroad, and officials said this trip would be no different.
"He’ll be meeting with dissidents, with members of civil society, including those who certainly oppose the Cuban government’s policies," Obama's deputy national security adviser, Ben Rhodes, told reporters.
Josefina Vidal, the director of U.S. affairs for the Cuban Foreign Ministry, said the Cuban government is willing to talk with the United States about its concerns.
"Cuba is open to speak to the U.S. government about any topic, including human rights," Vidal told reporters. She said the Cuban government wants Guantanamo Bay returned to Cuba and the embargo lifted before relations can be normalized.
Cuban dissidents gave a cautious welcome to the trip.
"He should take advantage of this opportunity to send a loud, clear message," prominent opposition blogger Yoani Sanchez wrote on her website. "The material and moral poverty that surrounds us is not the responsibility of the United States."
The United States has upheld a strict economic embargo on Cuba for more than 50 years, providing the Cuban government with a strong propaganda tool against Washington.

Obama's visit is likely to spark debate in the campaign for the Nov. 8 U.S. presidential election, particularly in the swing voting state of Florida, where many anti-Castro Cuban-Americans live.
Two Republican candidates, Ted Cruz and Marco Rubio, are conservative sons of Cuban immigrants and foreign policy hawks.
Rubio urged Obama to reconsider his trip, citing political arrests in the past year. “You will send the message to the oppressed Cuban people that you stand with their oppressors," he said in a letter on Thursday.
First lady Michelle Obama will accompany her husband on the trip to Cuba and also to Argentina.
Obama's Havana visit carries huge symbolic value as his administration takes steps to expand commerce with Cuba, only 90 miles (145 km) from Florida. The last sitting U.S. president to visit Cuba was Calvin Coolidge.
Tourism has surged recently. Airbnb, an online home-rental site, says U.S. rentals of homes in Cuba are booming. The countries have agreed to restore airline flights, and companies ranging from tractor manufacturers to telecommunications firms are assessing the market.
Cuba and Major League Baseball are discussing holding an exhibition game between the Cuban national team and Tampa Bay Rays in Havana on March 22, raising the possibility that Obama could throw the ceremonial first pitch.
Obama still seeks to pressure U.S. lawmakers to remove the decades-old embargo on Cuba but Republicans control Congress and are unlikely to act soon.
A persistent congressional critic of the thaw in relations with Cuba, Rep. Ileana Ros-Lehtinen, said the trip would be a reward that the Cuban government did not deserve.
"Pitiful that Obama rewards Castros with visit to Cuba while conditions for the Cuban people are getting worse," said Ros-Lehtinen, a Cuban-American Republican from south Florida.
Rhodes said he expected Cuban officials would bring up the status of the U.S. military base at Guantanamo Bay during the trip, but the administration opposes returning the area to the Communist government.
The White House did not provide details about which groups Obama would seek to meet, and said the United States would like to see more freedom of assembly and speech in Cuba.
Cuba says it has no political prisoners but the Cuban Commission of Human Rights and National Reconciliation, a dissident group, counts about 80 political prisoners in detention.
Fifty-three were released around the time of the 2014 agreement to normalise relations with the United States, but others were arrested last year, the group said.