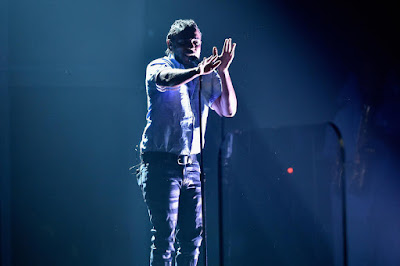 In the lead-up to the Grammy Awards on Monday there was hope that a decades-long drought for hip-hop artists in the show’s top category would finally come to an end. The Compton-born rapper Kendrick Lamar, who enjoyed some of the best reviews of the year and whose topical album, “To Pimp a Butterfly,” produced an unofficial anthem for the Black Lives Matter movement, was expected to have the edge in what was largely seen as a cut-off with multi-platinum pop star Taylor Swift. “To Pimp a Butterfly” had a near-record 11 nominations, a concept and songs so powerful that even the president of america endorsed it for their artistic integrity.
But instead Taylor Swift triumphed again. And while her album “1989” also received widespread critical support and spawned chart-topping hits, her defiant acceptance speech – in which she took what appeared to be a barely veiled shot at her perpetual antagonist, rapper Kanye West – underlined why she is a polarizing figure within the hip-hop community. The “New Slaves” rapper claimed he “made her famous” on a new track (in a series of tweets, West claims Swift co-signed), which alludes to his infamous interruption of an MTV Video Music Award acceptance speech she gave in 2009.
“And as the first woman to win Album of the Year at the Grammys twice, I want to say to the young women out there, there are going to be people along the way who try to undercut your success or take credit for your accomplishments or your fame.” Swift said. “But if you just focus on the work and you don’t let those people sidetrack you, someday when you get where you’re going, you will look around and you will know it was you and the people who love you who put you there, and that will be the greatest feeling in the world.”

Even though he lost in the top category, Lamar also did win in five of the other 10 categories in which he was nominated, including Best Rap Album and Best Rap Performance. He delivered perhaps the most emotional and searing performance of the Grammys, which included images referencing mass incarcerations, cities in flames amid protest and ended with a silhouette of Africa with Compton placed in the center. It was the kind of rage-fueled, unapologetically black performance that Lamar’s fans have come to expect from him – but was nevertheless a standout compared to the rest of the night’s largely lighter fare.
When he won for Best Rap Album earlier in the night, Lamar thanked the genre that spawned him and paid homage to other iconic rappers like Snoop Dogg and Nas, who have also been overlooked by the Grammys in the past.
Still, Swift’s victory continued a troubling trend for music fans who appreciate diversity. The Grammys, which failed to even recognize hip-hop with a category for decades, has not awarded an artist from the genre the Album of the Year trophy since 2004. And people of color are historically not well represented among the nominees or victors. In fact, Sir Paul McCartney has won more Album of the Year awards than all the women of color combined. Hip-hop has fared particularly badly. Since the Grammys began recognizing it as an art form in 1989, no hip-hop artist has won Song of the Year or Record of the Year. And only two hip-hop artists have won Album of the Year.
Lamar also lost last year, not only in the Album of the Year category, but Best Rap Album to Macklemore. The “Thrift Shop” rapper, who is white, later publicly said Lamar should have won and has suggested his victory may have been the result of racial privilege.
In the aftermath of the #OscarsSoWhite controversy – where the Academy Awards nominated only white actors for the second year in a row – there has been more attention placed on inclusion and representation within the entertainment industry. The Academy Awards have implemented new reforms to prevent future snubs of performers of color. It will be curious if backlash against the Grammys voters decision to snub Lamar will lead to change within that body as well.
The Grammys’ voting process is shrouded in even more secrecy than the Oscars. A committee, whose membership is not public, selects the Album of the Year nominees, and then everyone in the recording academy gets a vote in that category. The popular vote winner takes the prestigious award, which has led some to speculate that Swift’s status as a fan favorite may have eclipsed the critical consensus around Lamar.
Meanwhile, Lamar’s performance of “Alright,” coming on the heels of Beyoncé’s buzzworthy new music video and Super Bowl halftime performance, represent to the largest audience that messages sympathetic to the Black Lives Matter cause have received.
That, for now, may have to suffice for a victory for fans of Lamar and hip-hop culture.