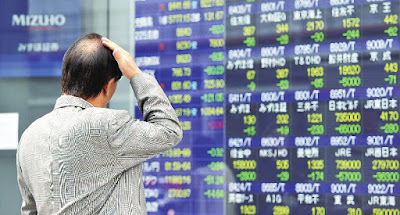 As Brent oil fell almost by 4 percent on Tuesday, erasing early gains after top producers Saudi Arabia and Russia dashed expectations of an outright supply cut by agreeing just only to freeze output if other big exporters joined them.
Benchmark Brent prices jumped briefly through $35 a barrel after Russia and Saudi Arabia agreed to keep output at January levels only, in what could be the first joint  non-OPEC and  OPEC deal in not less than 15 years.
Qatari energy minister Mohammad bin Saleh al-Sada said the step would help to stabilize the oil market, which has experienced much price declines not seen since the early 2000s because of a supply glut.

Elsewhere, inventories at the Cushing, Oklahoma delivery point for U.S. crude futures rose by nearly 705,000 barrels during the week to Feb. 12, traders said, citing data issued by market intelligence firm Genscape.
Brent settled down $1.21 at $32.18 a barrel, after rising earlier to $35.55.
U.S. crude stepped  to 40 cents at $29.04, off the day's high of $31.53.
Oil prices have fallen by more than 70 percent in the past 20 months, driven down by near-record production both from the Organization of the Petroleum Exporting Countries and other producers, such as Russia.
Tuesday's early rally ran out of steam as investors weighed the chances of an output freeze while Iran remained absent from the talks and determined to raise production. Sources familiar with Iranian thinking on supply said Tehran would be willing to consider a freeze once its production had reached pre-sanctions levels.
"I'm adding to the short positions I have in U.S. crude spreads as I only expect price declines from here," said Tariq Zahir at New York's Tyche Capital Advisors. "The output freeze will do nothing to alleviate excess supply."
Goldman Sachs, Wall Street's most influential voice in oil trading, was equally bearish on the plan, saying "there remains high uncertainty that it even materializes, in our view."
But analysts also cautioned of violent price spikes and market volatility in coming weeks should there be indications of serious production or stockpile declines. On Friday, both Brent and U.S. prices jumped about 12 percent each, rocketing from 12-year lows, on the renewed speculation that OPEC might cut output.