Syria crisis: Strikes on hospitals and schools kill not less than 50 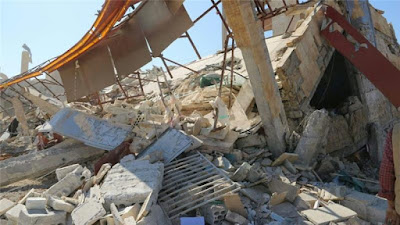 Not less than 50 people went down in the early hours of today - many children were killed and dozens of others wounded in an air raids on two schools and five hospitals in separate locations in northern Syria, UN Secretary-General Ban Ki-moon has said in a recent interview.
UN deputy spokesman Farhan Haq quoted Ban as saying on Monday that the death toll was a result of missile attacks and that victims included children.
Ban called the attacks "blatant violations of international laws" that "are further degrading an already devastated health care system and preventing access to education in Syria".
The secretary-general said the attacks "cast a shadow on commitments" made by nations seeking to end the Syrian conflict at a conference in Munich on February 11, which included a cessation of hostilities within a week and an end to attacks on civilians.

He did not say who was responsible for Monday's attacks, but some monitor groups suspect Russian raids.
In separate statements on Monday, France and Turkey branded the incident a "war crime".

MSF said those killed in the strikes were five patients, a caretaker and a guard.
"The destruction of the hospital leaves the local population of around 40,000 people without access to medical services in an active zone of conflict," MSF Syria operations chief Massimiliano Rebaudengo said.
In a separate incident, at least 14 people were killed and about 30 injured when air strikes and rocket artillery damaged parts of a hospital in the town of Azaz in Aleppo province, the media office at the rebel-controlled Aleppo local council said on Monday.
In the same raid, a school where refugees were sheltering was also hit.
The head of the media office, Abu Thaer al-Halabi, told news men that a section of a highway that facilitates the main supply line for humanitarian aid to the region was destroyed in the raids.
Halabi also said the strikes were carried out by Russian jets.
Also in Idlib province, another strike hit the National Hospital in Maarat Al-Nouman.
GLOBE TRENDING