The sucess of an R-rated super Hero movie? (Deadpool) 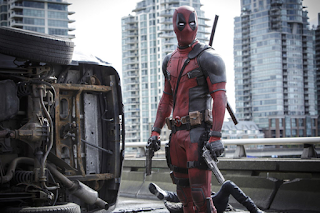 The newest superhero coming to the big screen arrives on Feb. 12 with the release of what will be a block buster Deadpool, which centers on the wisecracking superhero of the same name.
Deadpool (Ryan Reynolds), also known as Wade Wilson, is a superhero with healing powers who is skilled at fighting. The film about him co-stars Morena Baccarin and Ed Skrein.
“Deadpool” is being released by Twentieth Century Fox and is the newest superhero effort by the studio following the release of such films as the “X-Men” series.

As the promotional materials have made clear, “Deadpool” is not a film made for kids. Trailers include lots of adult material and the movie is rated R, which is somewhat of a rarity in the superhero world. The film is rated R "for strong violence and language throughout, sexual content and graphic nudity." (No Marvel movie, for example, has ever been rated R, nor were the “Dark Knight” movies or the “X-Men” films.)
With their global success, superhero movies now count younger viewers among their fans as well as the older moviegoing crowd. By including content in “Deadpool” that earns an R rating, is Twentieth Century Fox hurting the movie’s box office chances?
The conventional wisdom is that a PG-13 movie will do better than an R-rated movie, in part because more people can attend. Todd Cunningham of The Wrap noted that despite more R-rated movies being released in 2012 than in years past, PG-13 films were where the money was. The comedy “Ted” was one of the few R-rated movies that attracted big numbers.
“They’ve shown you can get away with an ‘R’ with comedies,” Jeff Bock, senior analyst at entertainment analysis company Exhibitor Relations, told TheWrap of companies like Universal Studios, which released “Ted,” and Warner Bros., which released the “Hangover” movies. “But with an action film, if you want to make $200 million, $250 million at the box office, you’ve got to get the biggest possible audience in there.”
The argument that “Deadpool” will be a hit, however, is bolstered by the fact that Deadpool is a popular character among comic book fans. Those who knew who he was before any trailers were released are sure to turn up if the movie gets good reviews and word-of-mouth. In addition, moviegoers who are old enough to see the R-rated film and likely to see a superhero film may be encouraged to check this out because there’s very little like it at the multiplex right now in terms of new releases.

The other movies of recent weeks include the animated movie “Kung Fu Panda 3” and the romance “The Choice.” The action-packed “Pride and Prejudice and Zombies” is more similar to “Deadpool” than these others, but some moviegoers may prefer their fight scenes without the trappings of Austen.
Variety critic Justin Chang notes that the R rating may help separate “Deadpool” from the superhero crowd. The rating makes it different.
“’Deadpool’ should show plenty of life at the box office, especially if its well-earned R rating functions less as kiss of death than as badge of honor,” Chang wrote.
MOVIE SECULAR MOVIE TRENDING