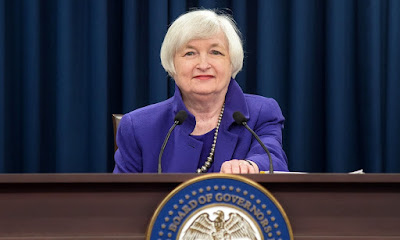 Federal Reserve chair Janet Yellen will spend much of Today  and Tommorow on Capitol Hill, as part of her semi-annual testimony.


At 8:30 a.m. ET on Wednesday, the Fed will release Yellen's prepared remarks, which she'll read to the House Committee on Financial Services before answering questions at 10:00 am ET.

On Thursday, Yellen will appear before the Senate Committee on Banking, Housing, and Urban Affairs and deliver the same remarks before another Q&A.

This is the highlight of a relatively quiet week for economic data and will give us Yellen's updated thinking on the economy and the rationale behind the FOMC's decision to raise interest rates in December.

Yellen is likely to reiterate the theme of modest US economic growth and maintain a cautious outlook for the US economy.

The labor market is likely to give Yellen one more reason to still be reasonably hawkish and indicate the more rate hikes could be coming.

The unemployment rate is at 4.9%, an eight-year low and within the Fed's definition of full employment. And on Tuesday morning, the JOLTS report — one of Yellen's preferred gauges — showed that at the end of last year employees quit their jobs at the highest rate since 2008, an indication of confidence among American workers.

The number of job openings was the second-highest on record.

But Yellen will also likely be asked to acknowledge the risks the US economy faces from slowdowns abroad and that financial conditions have tightened considerably since the Fed's rate hike in December.

Wider credit spreads and falling stock prices have helped to make financial conditions "considerably tighter" than they were in December, as New York Fed president William Dudley said last week in a speech.

And in addressing the volatility, RBC Capital Markets' Tom Porcelli notes that Yellen would not want to get trapped into temporarily satisfying market participants — who have short time horizons — by making policy decisions that create even more volatility later.

We know from the December meeting that the Fed expects to raise rates four times this year, or once at every meeting followed by a press release in 2016.

BMO Capital's Aaron Kohli wrote to clients that it's likely Yellen restates her commitment to leave the era of zero interest rates behind and continue hiking gradually but won't make any assurances about the next decision in March.

The Q&A session will be just as revealing, and even "feisty," according to Jefferies' Ward McCarthy. "Yellen will strap on her body armor because she is likely to be dodging bullets from both sides of the aisle," he wrote to clients.