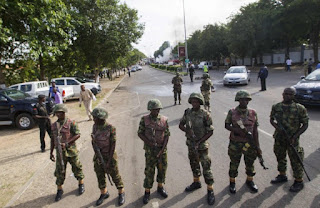 There are strong indications that Mr. Barry Mpigi, a candidate in the Rivers rerun election for the House of Representatives in Eleme/ Oyigbo has invaded the INEC RAC Centre in the company of soldiers and forcefully took away electoral materials including result sheets.
According to The Trent ‘s reporter on the ground on Rivers, Mpigi arrived the centre in the cover of night in the early hours of Saturday, March 19, 2016, with the aide of the troops, forced himself into the centre, and took away the documents which he intends to use in rigging the elections slated for today and declaring himself winner. This is a developing story. We will bring you updates as they come. The re-run election are to fill 2 senatorial seats, 12 seats on the house of representatives, and 22 seats in the Rivers House of Assembly. Elections are taking place in 23 local government areas, 319 wards, and 4,442 polling units.
GLOBE POLITICS TRENDING