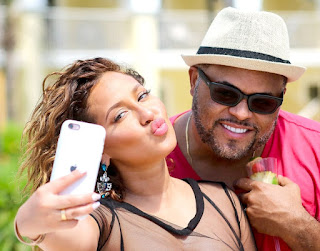 Adrienne Bailon as we could have it is dating Grammy Award– winning gospel music art Israel Houghton , a source confirmed to Us. The couple were recently spotted on vacation together at Dreams Tulum Resort & Spa in Tulum, Mexico.
The Real talk-show host and the gospel singer spent the week relaxing on the beach, unwinding at the spa and enjoying a tequila tasting. Although the relationship is new, Bailon, 32, and Houghton, 44, have known each other for as long as five years. He exec- produced her 2013 film I’m in Love With a Church Girl .. Speculation that the pair are engaged began after they were seen wearing matching bands on their ring fingers, but a source tells Us that’s just a coincidence.
“[They] just have the same rings from Cartier that they bought separately,” the friend explains to Us . “They normally hang out in group circles but over spring break decided to take a trip alone together for the first time.” Houghton announced his divorce from his wife, Meleasa , in February, after more than 20 years of marriage and a long separation. Bailon was previously engaged to Lenny Santiago after six years of dating, but the pair called off their engagement in September 2015. She also dated Rob Kardashian, but the two called it quits in 2009 after two years together.
In what seemed like a more surprising issue to sum it all up, Houghton '44' indirectly denies the intimate speculations and cleared the air with his ended marriage and Bailon's place in his past relationship.

In the midst of all that's going on in the world... Suffering, terrorism, deciding a future for our country, and making the world safer; It is sad that I am even having to address this matter... I understand that gossip and salacious untrue speculative stories are far more interesting and entertaining than the truth & facts. But, it's incredibly unfair to allow someone to carry the burden, blame & shame of something they had nothing to do with... I met Adrienne Bailon a bit over 2 years ago, we worked together & became friends... Our circles connected & we remained good friends. From a friendship, as two single adults we have very recently begun to explore a dating relationship. As I previously wrote in a statement I released a while back, My marriage had been over for quite some time before going public with my divorce announcement. Where I shared, or as some have pointed out 'over-shared' my failure in my marriage... From over 5 years prior. It seems to be simple math that I had not even yet met Adrienne during the time my marriage was falling apart. It deeply saddens me that an innocent party would be dragged into this situation that I have taken personal responsibility for. Adrienne is a woman of integrity & character... Most of all she is a true friend, and she should not be blamed for my past indiscretions. I assure you - I am willing to own my wrongs and I have in the past. God knows & sees all things. I appreciate your prayers, and I join you in praying for the issues of life that truly matter today all over the world. Israel Houghton
ENTERTAINMENT NEWS GOSPEL NEWS TRENDING