Marine dies in boating accident in waters near base 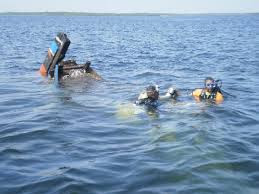 KAILUA, Hawaii — A spokesman for  Marine Corps Based in Hawaii confirms that a Marine died at the early hours of Saturday  after the boat he boarded capsized in waters near the base
The 17-foot boat overturned with three men onboard near the north side of Kaneohe Marine Corps Base Hawaii, the Honolulu Star-Advertiser reports.
Two of the men were able to swim back to shore and notify authorities, the fire department told the newspaper.
At 8:25 a.m., the man was found unconscious under 30 feet of water, the Star-Advertiser reports. He was not breathing and did not have a pulse, fire officials said.
Chuck Little, a Marine Corps spokesman, said that the man “is an active-duty Marine stationed at Marine Corps Base Hawaii.”
Little said he would not identify the man until his next of kin are notified.
GLOBE TRENDING