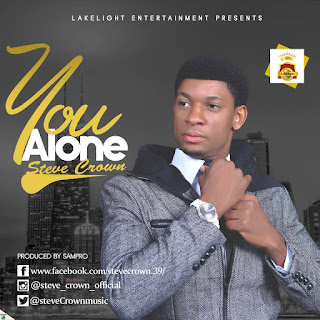 Steve Crown, You are great crooner announced two
weeks ago that he will be releasing a new single, after Just exactly two weeks of anticipation and puzzle which saw to the emergence of winners towards the official release of his brand new single, the wait is finally over, You Alone by Steve Crown is a worship tune that will bless you. Steve Crown is one of Nigeria’s fast rising gospel act
who debut album You Are Great. The album ranked as being the only gospel song on world 20 songs on iTunes as at last week. He has been nominated for several awards within and outside the country. Steve Crown is a passionate worship leader who is keen on leading the God’s people into a new realm of worship and using his voice to draw the lost back to God. He is
currently signed to LakeLight Entertainment.