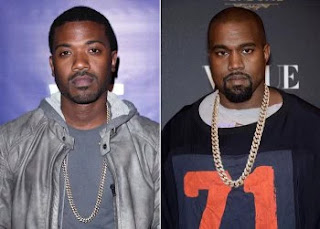 The singer (Ray J) who has a not good  history with West over Kim Kardashian feels pretty upset with his inclusion in the clip, which he says is already creating a breakage to in his relationship.
Entertainment Tonight which caught up with Ray J for his take on the controversial clip during the 2016 BET Awards at the Microsoft Theater in L.A. on Sunday, June 26 and he wasn’t in any way
Impressed had this to say:

Man, I’m just trying to stay positive,’ the 35-year-old told the publication. ‘I’m engaged. My marriage is all messed up ’cause of craziness. I’m not part of nothing crazy. I walk down a good path.’‘[My fiancée] tripping. It’s all bad in my world, and that ain’t cool,’ he continued. ‘Don’t put me part of nothing that’s weird, that
don’t make no sense.’

In a different  event in which  TMZ also reached out to Ray J for comments and while he declined, his manager, Wack 100 was on hand to sound off a warning – and advice – to Kanye.

‘If they didn’t show Ray J with his d**k in Kim Kardashian’s mouth, then tell Kanye to go back and reshoot that s**t,’ he
shouted at the camera. ‘Tell that n***a he’s a long way from Chicago, he’d better watch his motherf*****g mouth.’ Wack 100 who doubles as rapper Game ‘s manager is
famously known to have reportedly knocked out rapper
Stitches during his short-lived beef with the Compton native.
ENTERTAINMENT NEWS HIP HOP NEWS TRENDING