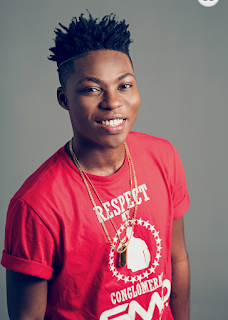 Prolific Nigerian recording artist, singer and songwriter, Ayoleyi Hanniel Solomon better known by his stage name Reekado Banks, has said he Is not in competition with his fellow acts on the label as they are only trying to impress themselves and label boss, Don Jazzy . Reekado Banks while reacting to a statement that he is the leading act on the label, told HF Tv , he doesn’t see it that way. In his own words: “I don’t think I am leading anything (Laughing). Don Jazzy is still leading the label, I don’t see it as

anyone is leading . Nobody sees it like anybody is leading, Everybody sees it like everybody is working together to make the label number one. Everybody sees it like they are trying to make Don Jazzy proud, they are trying to make themselves proud. So
yeah! It is not particularly anybody leading anything.” On why he hasn’t been featuring other acts on his songs, Reekado Banks disclosed he has been trying to focus on his
music and selling it without the help of other artistes.
In his own words: “For now, I am trying to sell my songs. I’m trying to make a name for myself, by myself. Definitely, probably
the next single and the one after this next single will feature someone. So much music.”
ENTERTAINMENT NEWS HIP HOP NEWS TRENDING