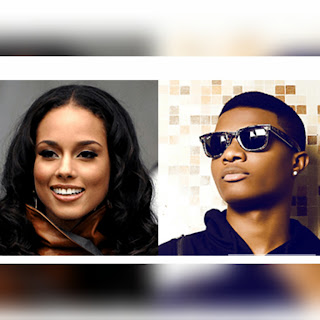 The Star boy breaks further ground in his International collaborations having worked with a steady growing list of foreign acts from Drake in ‘One dance’ to recording with Swiss Beatz, ‘Shabba’ featuring Chris Brown, Trey Songz and French
Montana, to more recently Sean Paul and more.
Sharing the news on Twitter, Wizkid enthused about his collaboration with Alicia Keys , saying;
Last night i made magic with Alicia Keys!

Real music ! # Blessed ! The singer recently headlined the One Africa Music Festival that took place at the Barclays Centre in New York, United
States of America, where he performed live on stage with the American producer Swiss Beatz.
Check his tweet confirmation below;
ENTERTAINMENT NEWS HIP HOP NEWS TRENDING