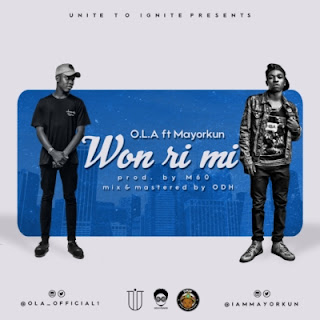 The raved 16 year old whiz-kid- O.L.A returns with his sophomore single, teaming up with one of 2016’s breakout stars – Mayorkun
O.L.A (Laolu Salami) released his debut single ‘Reverse’ featuring Jinmi Abduls a few months back, He made rounds on social media recently when rave of the moment ‘Mr Eazi’ endorsed his debut single & video, praising him for his talent and zeal at such a young age.
This new single is titled ‘Won Ri Mi’ and was produced by M60, mixed and mastered by ODH
Listen & share your thoughts
O.L.A – “Won Ri Mi” f. Mayokun
HIP HOP MUSIC TRENDING