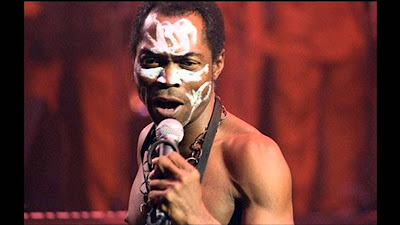 Fela kuti, Nigeria's chieftain and architect of Afrobeat music in the country who gave up the ghost in 1997, after 20 years of his demise, his outstanding costumes which he used for performances and brands of  his shrine are set for exhibition at the Hardrock Music Me Memorabilia Collection.
Fela Anikulapo Kuti who remains a household name in Nigeria will be highly celebrated for his great achievements and bravery come May 25. The ceremony which will be divided into two segment will start first with an induction into the legendary Elite group, also topping the list of event will be the performance of Fela's two eldest sons with their different bands The Positive Force Band And Egypt 80 and Also to wrap it all  up on the night, will be the release of Fela's tribute song by two-time Grammy Award winner, Lekan Babalola as well as a speed painting of the Abami Eda by Fola David.
ENTERTAINMENT NEWS TRENDING