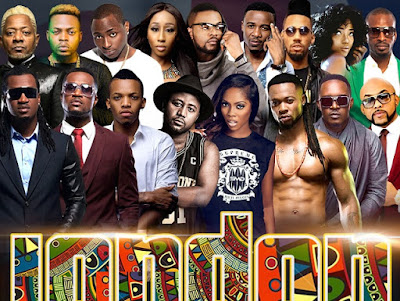 Some of the Nigerian artistes who performed at Saturday night’s One Africa Music Fest in London should be compelled to share their fee with the effervescent audience.
Why?
Because they literally served as backup singers and support system for Nigerian artistes who were unable to hold their own and deliver their notes flawlessly.
‘Flawlessly’ is perhaps an overstatement as their respective execution, was not a contest of great voices but mostly of hype-men attempting to be singers.

UNDERWHELMING PERFORMANCES:
While Ghana’s Sarkodie, South Africa’s Cassper Nyovest and the legendary Awilo Logomba were able to dish out decent performances, their Nigerian counterparts delivered wishy-washy, refund-worthy performances to the 12,500 fans who had converged on London from all parts of the United Kingdom.
It was the biggest African music extravaganza in the UK after all. It had taken months of planning, and intensive publicity for it to come to fruition.

A lot was expected but while the organisers put together a good show, Nigerian artistes only delivered: Mariah Carey’s lip-syncing, Simi’s energy-bereft performance and an upcoming artiste’s disjointed set.
Meanwhile, a live band set up behind them was given little to do. They didn’t dare to ‘sing’. They simply mimed all night.
Streaming worldwide via Tidal, one would think Nigerian entertainers, conscious of that, would attempt to put in a good shift, but alas, it was just another show where artistes come on stage to sound worse than their studio recording.
Tiwa Savage, Tekno and 9ice had one thing in common on the night: fighting a lost battle with their vocal chords.
While Savage eventually gave up the fight and relied on lip-syncing, Tekno and 9ice employed the help of the audience.
Save for Falz, who managed to hold his own, the others were as flat as a damp squib.
Few fans didn’t hesitate to hop on social media to vent their displeasure.

Teckno lip syncing to his songs at a live concert. Disappointed


Respect to Fuji musicians who perform live all the time.

This hip hop ones are lazy ….

There is a live band set up but these Nigerian artistes are lip syncing. Tiwa Savage of all people should not be doing this….
— Rosanwo (@rosanwo) May 13, 2017

A 12,500 capacity venue is filled to capacity yet these artistes are lip syncing. Not a free show ooo, there should be a standard
— Rosanwo (@rosanwo) May 13, 2017

We should boycott these so called “African Shows/Festivals”. We are encouraging lazy clowns to make money off us..
— Rosanwo (@rosanwo) May 13, 2017


Tekno is disgraceful on the stage. Absolutely. Gosh.

Over time, Nigerian music lovers and fans have become accustomed to poor, shoddy, badly-delivered performances, hence giving the artistes a false impression that they are decent on stage.
It is perhaps, this illusion, that led many of them to lip-sync in Britain, a base of some of the best music talents.
From Michael Kiwanuka to Adele to Benjamin Clementine, the country is home to great live performers and gifted musicians, both onstage and in the studio.
Hence, it must have been disappointing for non-Nigerians to witness an assemblage of ‘Africa’s stars’ dishing out mediocre performances.
THE DISEASE CALLED ‘AFRICAN TIME’
Asides the insipid sets, time management also marred the concert.
The chronic problem of African time has been the death of several Nigerian events and it appears that artistes and show organisers — sole culprits — haven’t learned anything yet.
While Tiwa Savage was cut off in order to make time available for other performances, host Banky W had to rush Davido through his set for the same reason.
The time was not well managed such that Psquare and Flavour almost did not perform. A situation which was averted by the organisers, Upfront & Personal Global Management.
But Jidenna wasn’t so lucky.
The venue managers cut the power, signalling an end to the concert that started an hour and a half late.
A disappointed Jidenna took to Instagram to vent.
“I was supposed to perform 2night but the show was cut off as I waited backstage. I’m disappointed that London wasn’t able to see me 2night. Regardless of whose to blame, to make this our time we must be on time,” he wrote.
None of the other performers on the night — inclusive of Olamide, Phyno and MI — was above average.
One Africa Music Fest, a convergence of the continent’s biggest artistes, after three editions, has reached a point where live performances should become compulsory.